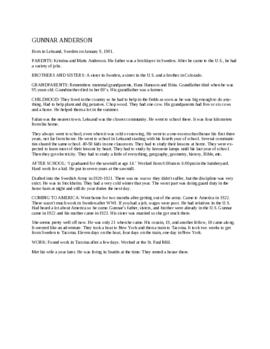 This interview was conducted with three people: Gunnar Anderson, his wife Ingeborg Anderson, and their friend Alva Pearson on April 30, 1980 in Tacoma, Washington.

Gunnar's portion includes information on his childhood, the Swedish Army, coming to America, and employment.

Alva Pearson discusses emigration, employment, the Vasa Lodge, and visits to Sweden. The interview was conducted in English.

Gunnar Anderson was born on January 9, 1901 in Leksand, Sweden. His parents, Kristina and Matts Anderson, had three other children-one boy and two girls. Gunnar attended school until he was 14, at which time he started working in the lumberyard. The Swedish Army drafted him in 1920, and Gunnar lived in Stockholm for the duration of his service. Having heard great things about America from his family there, Gunnar moved to Tacoma, Washington in 1922. It took him only a few days to find work at the St. Paul Mill. Gunnar met his wife a year later; they married in 1927 and lived in Seattle. Gunnar joined the Vasa Lodge, and he went on to serve as the president five times. Gunnar is also a member of Valhalla Lodge, which is service oriented like Vasa. He maintains contact with his family in Sweden, and he still uses the Swedish language at times. For 34 years, Gunnar had no desire to visit Sweden, but he has now taken three trips there.

Ingeborg (Smed) Anderson was born in Näs, Dalarna, Sweden on November 29, 1904. She is the 8th of 10 children of Brita and Lars Smed. As a child, Ingeborg lived on a large farm with her aunt over the summers. After finishing school, she worked on the farm full time. Ingeborg decided to come to the United States when she was 17 years old. She departed from Gothenburg with two brothers and a cousin. From New York, they took a train to Tacoma. There she worked as a housekeeper. In 1927, she married Gunnar Anderson, and she belongs to the Order of Vasa as he does.

Alva Pearson was born in Borlänge, Dalarna, Sweden in 1894. After both her parents had died, Alva moved to the United States in 1910. She settled in Tacoma, Washington and worked as a housekeeper. Alva joined the Vasa Lodge on September 27, 1912, becoming the first woman to sign the charter. Her participation in the Vasa Lodge has reinforced her Swedish heritage. The Vasa Lodge sponsors many Swedish activities and performances. After being in America 46 years, Alva finally visited Sweden; she has done so eight times.