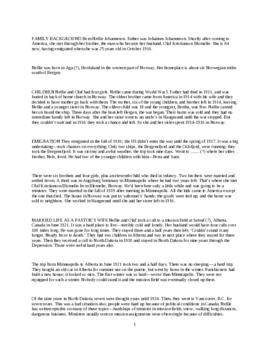 Nellie Blomelie was born on April 12, 1893 in Aga, Hordaland, Norway. Her father's name was Johannes Johanneson, and there were ten children in the family, six boys and four girls. Johannes died in 1911, and in 1914, one of Nellie's brothers and his wife visited from America and decided to have their mother return back with them. Nellie's mother took six of the youngest children with her, leaving Nellie and one of her sisters in Norway. Nellie and her sister remained in Norway for two more years before immigrating to America as well. While visiting one of her brothers, who was attending Augsburg Seminary in Minneapolis, Minnesota, Nellie met her husband Olaf Blomelie, who was also from Norway. Olaf and Nellie were married in 1919, and in 1921 they took a call to a mission field in Sereaf (?), Alberta, Canada. While living there, they had two daughters, Lillian and Helen, and later had two more at their next location. In 1930, they received a call to North Dakota and lived there for nine years, followed by a seven-year stay in Vancouver, British Columbia. The next call was to South Bend, Washington, but the people there were not very receptive to Christianity, and the Blomelies only stayed there for one and a half years. Olaf then went to Bush Bay, Alaska, and while he was there, Nellie and the girls moved to Tacoma, Washington. In 1962, Olaf fell ill, and they moved to Parkland, Washington. He died in February 1968, and Nellie then moved into an apartment at the University House. While living there, Nellie heard about a tour group that was taking a trip to Norway. She decided to join the group and spent five weeks travelling and visiting old friends and relatives. In America, Nellie honored her Norwegian heritage by continuing to cook Norwegian foods and finishing her Norwegian costume, which she used for syttende mai and other events.