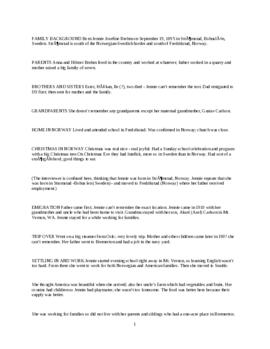 Jennie Carlson was born Jennie Josefine Brehm on September 19, 1895 in StrÃ¶mstad, BohuslÃ¤n, Sweden. She moved to Fredrikstad, Norway as a young girl and was educated and confirmed there. Jennie moved to America with her grandmother and her uncle in 1910, her father had come first, and her mother and siblings came later. Jennie learned English quickly, taking night classes in Mt. Vernon, Washington. She worked as a housekeeper for Norwegian and American families. Jennie moved to Seattle and married in 1919; she bore two children, a boy and a girl. Jennie returned to Norway for a visit in 1959 and can still speak the language, but she has not retained many Norwegian or Swedish traditions in America.