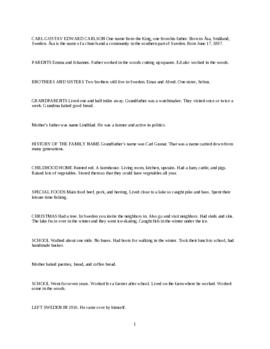 Ed Carlson was born Carl Gustav Edward Carlson on June 17, 1897 in Åsa, Småland, Sweden. Ed's parents, Emma and Johannes Carlson, had three other children: Einar, Alved, and Selma. Ed attended school for seven years and worked on a farm after classes. In 1916 Ed left for the United States on his own and settled in Aberdeen, Washington. After working for a time in a shipyard building boats for the army, Ed got a job at a Swedish sawmill where he worked for 25 years. In 1924 Ed married Anna Anderson, and they had four children. Ed is a member of the Vasa Lodge where they practice Swedish traditions; he still speaks the language at times. Ed has taken several return trips to Sweden, although he is glad that he lives in America.