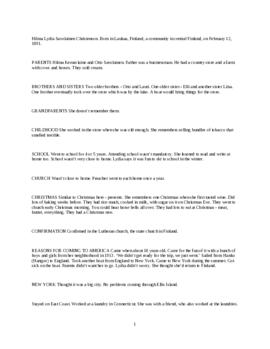 This interview was conducted with Lydia Christenson on May 17, 1982 in Seattle, Washington. It contains information on family background, emigration, marriage and family, and Finnish heritage. Lydia's oldest son wife speaks on the tape also. The information was conducted in English.

Lydia Christenson was born on February 12, 1891 in Laukaa, Finland to Otto Savolainen and Hilma Kerurolaine. Her father was a businessman, and there were four other children in the family. Lydia attended school for four or five years, but attendance was not mandatory, and the children were taught how to read and write at home also. Lydia immigrated to the United States when she was eighteen years old. She came with a group of teenagers from her neighborhood and planned on returning to Finland. Upon her arrival, Lydia began working at a laundry in Connecticut and then became a housekeeper in Worcester, Massachusetts. In Worchester, Lydia met her husband, Amund Christenson, at the Assembly of God church. Amund was originally from Norway and became a preacher. They had five children together: Arthur, Ray, Arnold, Enoch, and Elaine. Through the years, the family lived in various towns throughout the Midwest, and Amund could be compared to a travelling evangelist. Amund passed away while they were living in Missoula, Montana, and Lydia then moved to Seattle, where Arthur and Ray lived. She bought a small house and got a cooking job at Fredrick and Nelsons, retiring at age sixty-five. Lydia has not been active in any Finnish organizations, but has made two trips back to Finland and cooked some traditional Finnish foods for her family throughout the years.