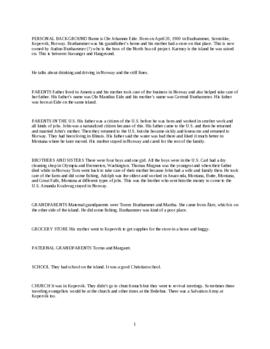 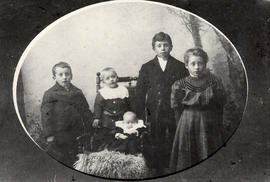 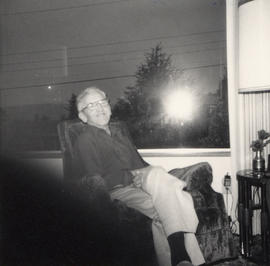 This interview was conducted with John Eide on October 15, 1982. It contains information about family background, becoming a Christian, emigration, return to Norway and re-emigration, marriage and family, and church involvement. The interview also contains a paper by John regarding baptism, a photograph of John and his siblings in Norway, and two photographs of John at the time of the interview. Mr. Eide speaks Norwegian fairly often during the interview.

John Eide was born Ole Johannes Eide on April 20, 1900 in Brathammer, Sørstokke, Karmøy, Norway. Brathammer was his grandfather's home and Karmøy is an island between Stavanger and Haugesund. John's parents were Ole Mandius Eide, also known as Johannes Løberg, and Gertrud Brathammer. John's father immigrated to America before he was born and became an American citizen. Ole then returned to Norway to marry Gertrud, whom he took back to America. However, Gertrud became sickly and lonesome and returned to Norway to care for her family and run a store at Brathammer. Ole continued living in both America and Norway, and he and Gertrud had four children in addition to John: Adolph, Amanda, Carl, and Tom. John went to the Christian school when he was younger, but believes he was truly saved when he was seventeen. He and a neighbor were coming home from a dance on New Year's when 'a spirit came upon them.' They used to call Karmøy 'Hellige Øy,' which means Holy Island. In an attempt to make a better living, John immigrated to Anaconda, Montana in 1923. There, he lived with his older brother Adolph and met his first wife Mary Eastman, who was of Swedish descent. They both attended church at the Salvation Army Hall. John originally did not think he was going to marry her and returned to Norway in 1926. He later re-immigrated to the United States, and after staying in Brooklyn, New York for a month, he returned to Anaconda and married Mary. John worked on the smelter in Anaconda, and they bought a small four-room house. The Eide's had four children: Ruth (Nelson), Charles, Kenneth, and David. In Anaconda, John was also very active in the Lutheran Church and started a mission, which later became an Assembly of God Church. In 1968, John and Mary moved to Spokane, Washington, where Mary later passed away. In 1979, John moved further west and met his second wife, Lois, in Des Moines, Washington. John has returned to Norway four times and continues to sing religious songs in Norwegian as well as English.