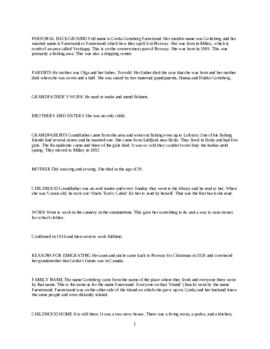 Gerda Farestrand was born in 1909 in Måløy, Norway to Torvald and Olga Gotteberg. Torvald, who passed away the year Gerda was born, was a baker and Olga did weaving and sewing. When Gerda was seven and half years old, Olga passed away as well, and Gerda, who was an only child, was raised by her maternal grandparents, Hanna and Haldor Gotteberg. Haldor made and mended fishing nets. Måløy was a shipping center, and Gerda clearly remembers WWI and the effects it had on Norway. Flour, sugar, shoes, margarine, butter, and grains were rationed from 1914-1919, but Gerda's family never went hungry. At the end of the war, Austrian and German children were brought to the island in order to restore their health. Gerda attended school until she was fourteen, working in the cannery during the summers, and after she was confirmed, she went to work full-time. In 1928, Gerda's aunt and uncle returned to Norway for Christmas and convinced Gerda's grandmother that Gerda's future was in Canada, where they lived. Gerda's uncle offered to pay her way over, and she left for Flaxcombe, Saskatchewan on March 7, 1929. Gerda was not impressed with Flaxcombe and stayed with her aunt and uncle only fourteen months before moving to Saskatoon, where she got a housekeeping job. After fourteen months, Gerda moved to Toronto to find better employment. She got a job the first day she was there, which lasted for one month. She then began working for a doctor's family. While in Toronto, Gerda got a letter from her future husband, Ingvar Farestrand, who was living in Portland, OR. Ingvar was from Måløy also and asked Gerda to come to Portland. If she did not like it, he offered to pay her way back to Toronto. Gerda agreed to come, but at the immigration office in Vancouver, British Columbia, she was told that her passport was only good for travel in Canada. Ingvar then came up to Canada to help her obtain a permit to the United States, but she ended up applying for a marriage license, and they were married on January 15th. At first, Gerda was not impressed with Portland either, but she made it her permanent home. In Portland, Gerda worked at a cleaning shop with her husband for almost thirty-one years and became active at Norse Hall. She and Ingvar had three children: Harvey, Irene, and a second daughter (name not obtained during interview). Ingvar had a bad heart and passed away twenty years after they were married. Gerda returned to Norway in 1958 and 1960, and believes that there is a revival of Norwegian culture in the United States, which includes their carving, sewing, knitting, and literature as well as the traditions. Since retirement, Gerda has kept herself busy with activities such as visiting the nursing home, participating in the Friendship Club, visiting her daughter, and attending a class on ancient Scandinavian history. She also donates to an organization called 'Balogna Joe' and bakes cookies for the less fortunate at Christmas.