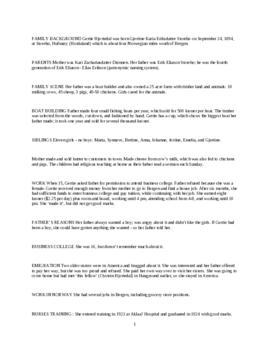 The interview was conducted with Gjertine Hjortedal on August 22, 1984 in Spokane, Washington. This interview contains information about family history; boat building; work in Norway; nursing training; marriage and family; settling in the U.S.; gardening; life in Edwall, WA and rural America; the Great Depression; the birth of her son, Erling; emigration and voyage to America; American food; work in the U.S.; return trips to Norway; citizenship; Norwegian heritage. The interview was conducted in English with some Norwegian towards the end of the interview. Also see Osten Hjortedal, T273.

Gjertine Karia Hjortedal was born Gjertine Eriksdatter Storebø on September 24, 1894 at Storebø, Huftarøy, Hordaland, Norway. She was one of eleven daughters by Kari Zachariasdatter Drønnen and Erik Eliason Storebø; her father was a boat builder and owned a 25-acre farm where the family lived. When Gjertine was 15, she asked her father for permission to attend a business college, but he refused because she was female. She went to Bergen and found a house job, and after six months she had enough money to pay tuition, continuing to work while attending the school. She then had several jobs in Bergen, including grocery store positions. She entered nursing training in 1921 at Aklaa (?) Hospital and graduated in 1924, after which she took a job in a hospital in Haugesund. She met her husband, Øystein Hjortedal, while working the night shift at the hospital; two of Gjertine's sisters had immigrated to the U.S., and one had asked Øystein to meet Gjertine when he went home to visit Norway in Christmas 1925. Gjertine visited her sisters in the U.S. and because of Øystein, remained in America. She got a job at Fairview Hospital in Minneapolis, MN and then at Cook County Hospital in Chicago, IL. She and Øystein married when Gjertine was 33 and lived in Marlin, WA, but moved to Edwall, WA in about 1930. Her oldest child, Gladys Kate, was born while Gjertine was visiting her sister in Glasgow, MT, and her son, Erling John, was born in Edwall in 1931. Gjertine later worked as a private duty nurse for seventeen years, and became head nurse at Riverview Terrace in Spokane, WA when she was over sixty years old; she retired a few years later. Her name was changed from Gjertine to Gertie when she gained citizenship, and she took a return trip to Norway after WWII. Gladys studied nursing at St. Olaf and married Hans Johnson, a lawyer from Hawley, MN; she lives in Denver, CO. Erling lives in Spokane and is Director of Financial Affairs for Spokane Falls Community College. In 1984, Øystein Hjortedal passed away. Gjertine Hjortedal passed away in 1990.