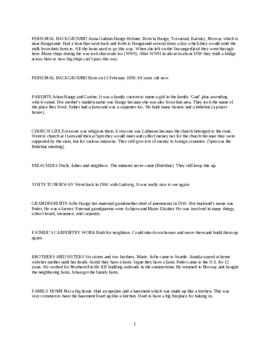 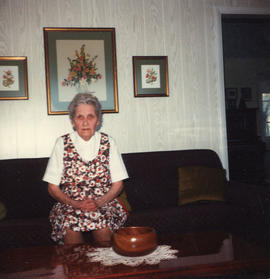 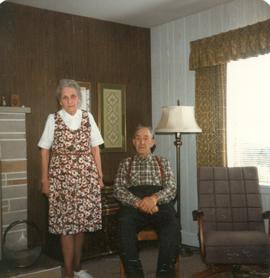 The interview was conducted with Gudrun Holmes on March 18, 1982 in Stanwood, Washington. This interview contains information on family history; church life in Norway; father's carpentry work; brothers and sisters; family home, Christmas, and school in Norway; Norwegian foods; living with a cousin; meeting husband; reasons for emigrating; wedding; parents' feelings about emigration; voyage to America; West Coast; house in Stanwood, WA; railroad work; Great Depression; impressions of U.S.; language problems; children; visit to Norway; church life in U.S.; Norwegian foods. The interview also contains photographs of Gudrun Holmes and her husband Elias at the time of the interview. The interview was conducted in English with some Norwegian towards the end. Also see Elias Holmes, T152. Gudrun's family tree is also in the Karmøy Torvastad bygdebook on page 53.

Anna Gudrun (Hauge) Holmes was born on February 13, 1898 in Hauge, Torvastad, Karmøy, Norway. Her parents were Johan and Gurine Hauge, and she had six sisters and two brothers. Gudrun started school when she was seven and went for seven years; she then attended Ungdomsskole at Kopervik on Karmøy for six months, where she learned to sew, cook, weave, do arithmetic, and speak English. She stayed with a cousin in various places in 1914 and then returned home. In 1927, she met her husband, Elias Holmes, who had lived in the U.S. since 1914 and was her sister Sophie's brother-in-law, when he was visiting Norway. Her cousin's husband died in 1929, and Gudrun went to help and stayed there until Elias came back to marry her in 1930. They were married in Dome Church in Stavanger on June 7, 1930 and left for the U.S. on August 17, 1930. They lived in Huntley, MT, which is near Billings, MT, for six months when they first arrived, and then in Judson, ND for a number of years. Because Elias was young and worked for the railroad, they were moved often; they moved to Richardton, ND, then Stipek, MT, and back to Richardton before Elias left the railroad and the family bought a farm in Stanwood, WA in 1937. They have four children-Kjell, John, Gudveig, and Leif. Gudrun visited Norway with her daughter Gudveig in 1966.