As Bjug Harstad and others were prospecting for gold in the Klondike, a Dr. Lee from La Crosse Wisonsin shot a moose for the groups winter meat supply. He gave the horns to Bjug Harstad for the university. They are part of the University Archives collecion and are now hanging over the fireplace in the Alumni Office.

Reisen til Alaska .(Letters to Pacific Herold from Bjug Harstad)

Letters and Articles on a Trip into the Yukon Region by B. Harstad published in the Pacific Herold translated by Oliver Harstad 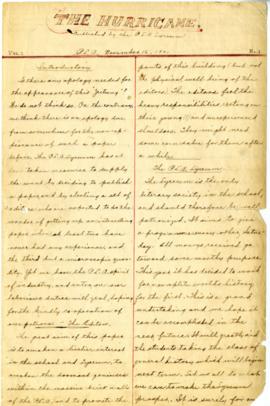 Part of The Hurricane

Includes a translation to English by Adolph Hartstad,1986

The Mission Committe of the Pacific District of the Norwegian Synod has asked the Parkland congregation to permit its pastr B. Harstad to serve congregations in Los Angeles and Santa Barbara, California who have given their pastor a leave of absence for a period of about five months, starting June, 1904." Pastor Harstad wrote letters to Pacific Herold describing his journey. His son Adolph Harstad translated the letters from Norwegian,they are included here.

Tollef Aanondson Harstad was the third child of Aanond Tellefson Harstad and Torbjor Kittilsdaughter Harstad and was born June 16,1836 in Saetersdal, Norway. He married there in May of 1861 to Margit Salvesdaughter Nomeland, also born in Saetersdak, Norway, Aug.2, 1840. They came to Seneca,LaSalle County, Illinois in 1861 and settled later at Greenfield, (now Harmony) Minnesota, Fillmore county in 1867. Tollef died Dec. 9, 1907 and about two and one half months later, Feb. 20, 1908 Margit also passed away. They are both at rest in Greenfield (Harmony) Cemetery. They had eleven children.

Oregon Railway and Navigation Company
File includes a first class ticket issued to B. Harstad by the company