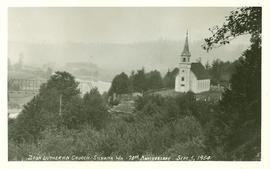 A photograph of Zion Lutheran Church in Silvana, Washington on its 70th anniversary on September 5, 1954.

This folder contains a congregational historical record, a booklet from the dedication service, a bulletin from 1962, a congregational statistical record, a newspaper article about Roger Patrow, a church relations visit summary, photographs of the centennial 1990, an installation bulletin for David Eric Paulson from 1988, a centennial booklet, correspondence from Harvey J. Neufeld to Pastor Patrow, an invitation to the centennial, and a church directory..

This folder includes a congregational historical record, a letter from Avis Anderson, a letter from Milton Nesvig, a written history of the church, and a booklet from the 75th anniversary.