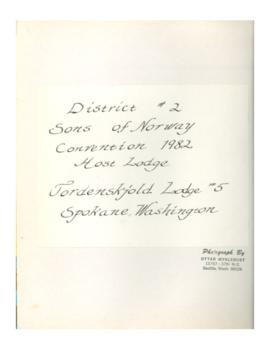 This interview was conducted with Sigurda Aamot on August 7, 1981 in Tacoma, Washington. It contains information on family background, emigration, work, marriage, community activities, personal hobbies, and Norwegian heritage. The interview also contains a poem entitled 'A Prayer for America' by Sigurda, a song entitled 'The Emigrant Women' by Sigurda, and a photograph of Sigurda at Normanna Hall's 17th of May celebration, 1981. The interview was conducted in English with some Norwegian towards the end of the interview. See also Magdalena Haug Krokenes (t234).