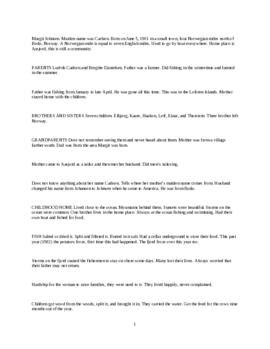 The interview was conducted with Margit Johnsen on March 11, 1982 in Tacoma, Washington. This interview contains information on family history, childhood home, living in a fishing family, Christmas traditions, church, climate in northern Norway, school, work in Norway, emigration, Ellis Island, train trip to Tacoma, language difficulties, work in the U.S., marriage and family, community involvement, trips back to Norway, and pride in Norwegian heritage. The interview was conducted in English.

Margit Carlsen Johnson was born on June 5, 1901 in Leines, Norway, a small town twenty-eight miles north of Bodø. She is one of seven children by Bergitte Danielsen and Ludvik Carlsen, who was a farmer and fisherman. Margit went to school until she was confirmed at age 15 and then stayed with a neighbor and worked until she was 18; she had gone to work on neighboring farms since she was 13. She then went to Bodø and worked in the canneries. An uncle had emigrated and while he was visiting Norway, he extended an invitation to her to live with him in the U.S. Six years after she started working in the canneries, she decided to emigrate and wrote to her uncle in 1924. She waited a year before leaving and left from home on a boat to Trondheim in July 1925, took a train from Oslo, and then took the 'Bergensfjord' to Ellis Island. It took ten days to get from Oslo to New York and 5 days by train to get to Tacoma, where her uncle met her. Her uncle owned a boarding house in Tacoma, and her aunt helped her get a job in a fruit cannery in Sumner, WA. She also stayed with a Danish family, the Hansens, for seven months doing housework. She then got a job working in the kitchen for a herring company in Alaska and worked there for two summers; she also worked at Nalley's for a while. Her husband, Einok Johnsen, was a friend of her uncle's and had stayed in his hotel, the St. Francis Hotel. Einok came to the U.S. from Bodø, Norway in 1911, at which time his name was changed from Johansen to Johnsen. They were married at the courthouse in 1927. Einok was a fisherman and a longshoreman and fished on the Bering Sea in Alaska during the summer; he died in 1954. Margit and Einok had one son, Earl; he was born on June 22, 1929 and died in 1958. Margit became a member of Daughters of Norway when she first came to the U.S., belongs to Bethlehem Lutheran Church, and now helps with Scandinavian Days. She visited Norway on 1948 and saw her parents, and her last trip was in 1978.