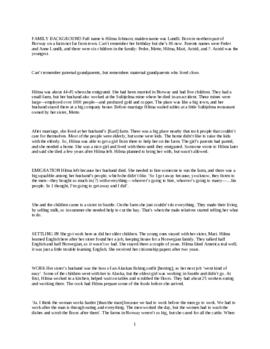 This interview with Hilma Johnson conducted on April 19,1979 in Port Townsend, Washington contains information on family history, first marriage and husband's death, life in a mining town, running a farm, emigration, settling in Seattle, work in the U.S., traditions in Norway, return trips to Norway, fishing in Alaska, trapping, and life in Alaska. The interview was conducted in English with some Norwegian towards the end of the interview.

Hilma (Ludli) Johnson was born in the northern part of Norway in about 1893, and she was one of six children by Peder and Anne Ludli. She was first married in Norway and had five children; her husband Karl worked in the Sulitjelma mine, which produced gold and copper. Before marriage, she waited tables at a little Sulitjelma restaurant owned by her sister Mette, and she lived on Karl's farm after they married. Karl was killed in an accident at the mine and Hilma was left with the farm to run and the children to raise. Her husband's male relatives were overbearing and bossy and she wanted to get away, so she and the children emigrated around 1937-38. They lived in Seattle, Washington with Hilma's sister Mari, and Hilma kept house for a Norwegian family for a couple of years. She received her citizenship papers after two years. Her sister's husband was the boss of an Alaskan herring fishing company, and Hilma and some of her children went to Alaska. She worked in the kitchen, helped wait tables, and scrubbed floors at first, and then got married again to a Norwegian fisherman. They fished in Alaska, sometimes staying for the winter, and Hilma took up trapping. In Norway, she belonged to the Lutheran church.