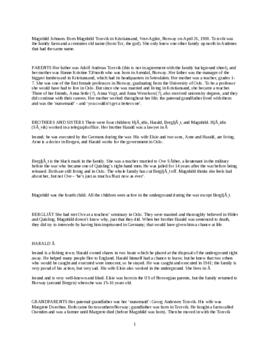 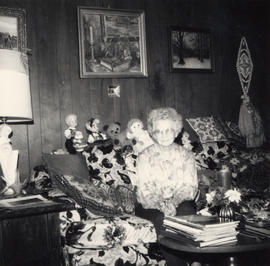 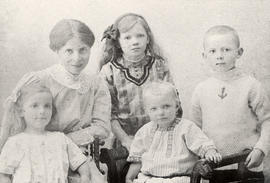 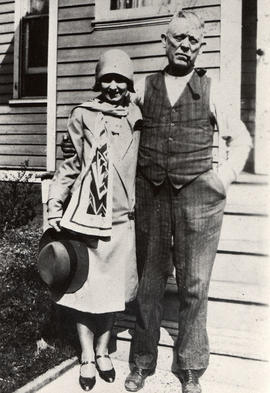 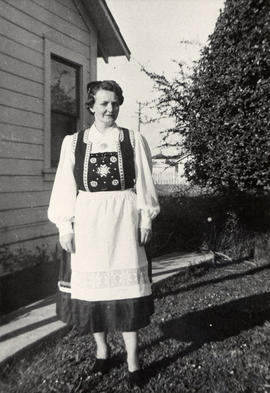 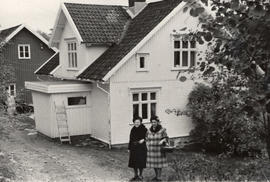 The interview was conducted with Magnhild Johnsen on November 15, 1982 in Shelton, Washington. This interview contains information on family history, personal and family involvement in WWII, childhood, school, family home, church, Christmas in Norway, emigration, reasons for emigrating, voyage to America, work in the U.S., marriage, WWII in Norway, Russian prisoners of war in Norway, return to America, return trips to Norway, changes in Norway, and Norwegian heritage. The interview also includes Magnhild Johnsen's certificate as a 'Life Member' of the Sons of Norway (January 25, 1982) and photographs of Magnhild as a child with her siblings and mother, Magnhild and her uncle (1929), Magnhild in Eureka, CA (April 26, 1952), Magnhild at her childhood home (October 1974), and Magnhild at the time of the interview. The interview was conducted in English.

Magnhild (Torsvik) Johnsen was born on April 26, 1908 in Kristiansand, Vest-Agder, Norway. Her parents were Adolf Andreas Torsvik and Hanne Kristine TÃ¸nseth, and she had two sisters and one brother: HjÃ¸rdis, BergljÃ¸t, and Harald; her father was the manager of the biggest lumberyard in Kristiansand and her mother taught first through seventh grade. Her mother was one of the first female professors in Norway, graduating from the University of Oslo, but became a teacher because she would have had to live in Oslo to be a professor. Magnhild's father had a farm just outside of Torsvik, but the family moved into Kristiansand when WWI broke out. Magnhild attended school, graduated from high school, and attended one year of college. Her mother died around 1920 and after college, Magnhild kept house for her father. She then wanted to attend Stabekk husmorsskole in Oslo to become a home economics teacher, but she had to have a year's employment in housework to qualify. She decided to immigrate to the U.S. and work for one year in Brooklyn, where her father's oldest brother, Bernhard Torsvik, lived. Magnhild left from Kristiansand aboard the 'Stavangerfjord' on March 9, 1929. While on the dock in Kristiansand, an old boyfriend introduced her to Olaf Johnsen, a fellow passenger, and Olaf brought her water when she was seasick and in bed. She landed directly in Brooklyn, bypassing Ellis Island, and her uncle and his 20-year-old daughter met her and took her home to Woodhaven, Long Island. Magnhild began her first job as a housegirl for a Jewish family, but the job did not last long because the family moved back to Israel. Olaf Johnsen had emigrated in 1923 and had been visiting Norway when he and Magnhild met, and he got her a job as a cook at the same home where he was a chauffeur and caretaker. The owners, the Youngs, were wealthy Americans who owned a business school in Brooklyn, and Magnhild stayed at this job until after she married and was pregnant with her first child. After meeting Olaf, she decided not to return to Norway and married (no date given). Their first baby, Christine, was born on April 8, 1931 while Olaf and Magnhild lived with Olaf's sister in Lakewood, NJ. Olaf then got a job with Providence Loan Society in New York, and their second child, Aina Sylvia, was born in Brooklyn on September 1, 1932. Magnhild's father-in-law back in Kristiansand, Norway was alone at that time, and they decided to move back and care for him in 1938. The family lived in Kristiansand from 1938-48, and Olaf was employed as an electrician; their third child and only son, Harald, was born on August 30, 1942. During WWII and the German occupation of Norway, Magnhild, her family, and her siblings except for BergljÃ¸t helped with the Norwegian underground movement; Magnhild's brother Harald helped people flee to England and he was caught and executed in 1941. After the war ended, Christine and Aina really wanted to return to America, and the family decided to return to Lakewood, NJ in 1948. A friend of Olaf's offered him a job as an electrician in Hoquiam, WA, and they moved across the country in a truck in the fall of 1948. They lived in Hoquiam for three years and then transferred to Eureka, CA, but moved back to Washington when grandchildren came so they could be closer to family. Olaf worked as an electrician at Simpson Lumber Company in Shelton, WA until he retired. After his retirement, he and Magnhild traveled all over Norway in 1970, and Magnhild visited again with her daughter in 1976. Magnhild has always been involved in the Lutheran church, both in Norway and the U.S., and has held offices in Eureka and Aberdeen, WA. She also has a life membership in Sons of Norway and was an officer there as well, and continues to attend meetings in the Olympia lodge. She received her citizenship in Eureka in 1954; she had her first papers in New York, but lost them because the family was out of the U.S. for over five years.