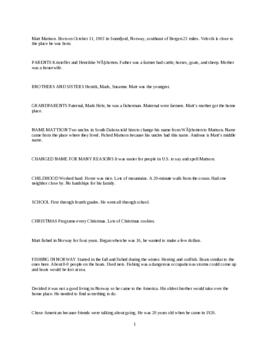 Matt Mattson was born Matt WÃ¦sbotten on October 11, 1903 in Sunnfjord, Norway, which is located twenty-three miles southeast of Bergen. Matt's parents were Kristoffer and Henrikke WÃ¦sbotten, and he had three older siblings: Henrik, Mads, and Susanne. Kristoffer was a farmer and Henrikke was a homemaker. Matt began fishing in Norway when he was sixteen years old, but in April 1926, he immigrated to America, where he hoped to make a better living. Matt went to South Dakota, where he had two uncles. They were the ones who convinced him to change his name from WÃ¦sbotten to Mattson, which came from the place they lived and was the name they used. Matt had studied carpentry in Norway and worked on a farm as carpenter in South Dakota. Displeased with the cold weather in South Dakota, Matt went to Tacoma, WA, where a friend of his lived, in December. In Tacoma, he worked in a sawmill and then began fishing in 1928. A lot of Norwegians fished in the Seattle-Tacoma area, and Matt got the job through his friends. He fished for halibut seven months out of the year. In 1938, Matt married Emma Bratten, who was from Bergen, Norway. They had three children: Shirley, Kenneth, and Dennis. In between fishing, Matt built docks around Tacoma and worked on the Narrows Bridge during the winter of 1939-40. Matt was not very active in Tacoma's Scandinavian community but was a member of the Sons of Norway. Matt returned to Norway for the first time in 1947 and has made four trips since then. He remains in contact with his family there and continues to speak Norwegian. Nevertheless, Matt is glad he emigrated and feels he is an American.