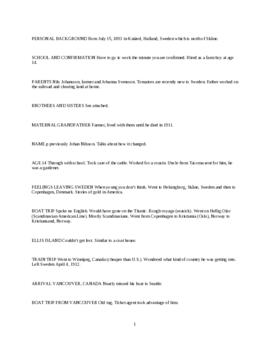 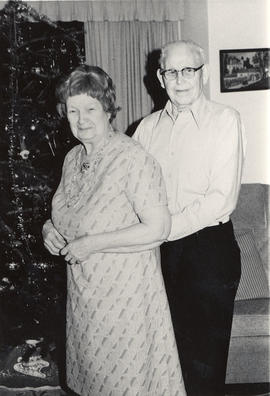 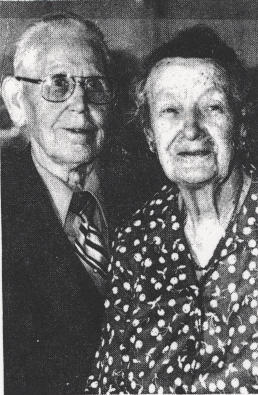 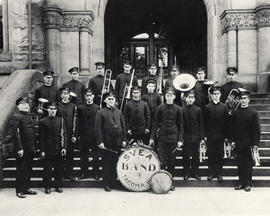 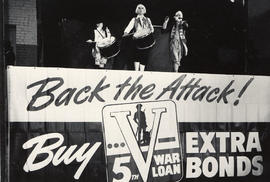 The interview was conducted with John Nelson on July 1, 1981 in Tacoma, Washington. This interview includes information on personal background, emigration, work, community life, and Swedish heritage. It also contains a photograph of John Nelson in the Svea Band of Valhalla Lodge in Tacoma, Washington and a publicity shot in the Tacoma Armory, which includes John. Also see Ruth Nelson. The interview was conducted in English.

John Edwin Nelson was born Johan Nilsson on July 15, 1893 in Knäred, Halland, Sweden. John began working immediately after completing school and receiving his confirmation at the age of 14. He worked for his cousin and then his uncle tending cattle and gardening. On an impulse, John decided to move to America; he traveled aboard the Hellig Olav, although he had the option of going on the Titanic. John left Sweden on April 4, 1912 and arrived in Tacoma, Washington on April 25. After initially working as a gardener, John found jobs at a fuel company, in a sawmill, and on a streetcar. He attended night school for English, but he struggled to learn the language. Even now, he admits, he occasionally has problems. John moved to Alaska to mine for a short time, but he returned to Tacoma and soon met his wife at a party. They both attained their citizenship and had one daughter. John finally got into the real estate business after working again in a sawmill. John has been a member of First Lutheran Church and has been very active in Scandinavian groups like Vasa and Valhalla, in which he is the longest member (70 years). John played the alto French horn for the Vasa Svea Band and is a member of their male chorus. He values his involvement with these groups a great deal. Occasionally, he and his wife prepare traditional Swedish food, and they can still speak the language. He has returned to Sweden four times to visit family and has been tempted to stay permanently. America slightly disappointed John, but he wanted to stay for the sake of his wife and his daughter.