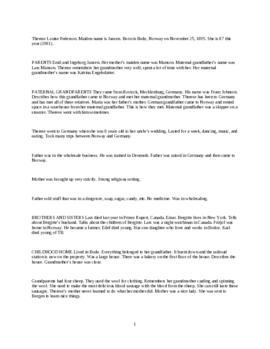 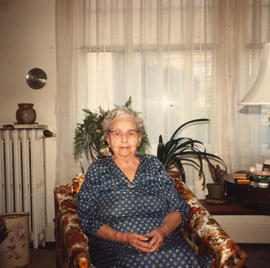 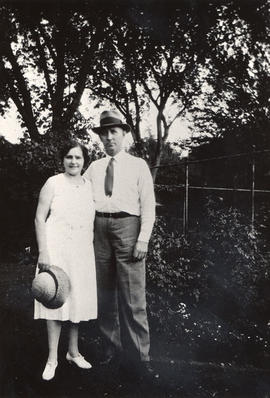 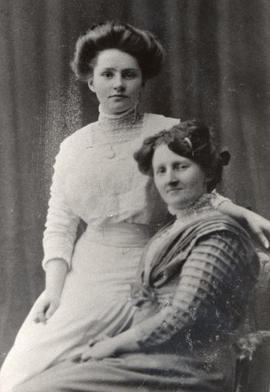 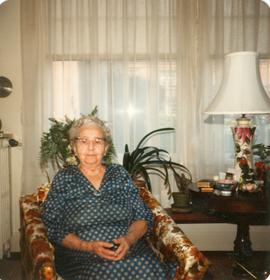 Therese Pederson was born on November 25, 1895 in Bodø, Norway to Emil and Ingeborg Jancen. Emil was German and Ingeborg was Norwegian, and they met through their fathers. Both of their fathers were in the herring business and did business with each other in Norway. Therese had six siblings: Lars, Einar, Bergitte, Fritjof, Eilef, and Karl. The family was raised in Norway, but Therese visited Germany on many occasions. Therese was confirmed in January 1911, after which she went to Germany for a few years. She left Germany when the war broke out and then went to 'husmor' school in Oslo. There, she also got a job caring for six boys. She worked for this family for five years. In 1921, Therese's mother decided that she should go to America, which Therese did not want to do. Ingeborg arranged for Therese to stay with her friends, Mr. and Mrs. Strømma, in Minneapolis, MN. Therese helped the Strømmas with their housework for a while and then got a job with the Carpenter family, in which she took care of their children. After ten years, she visited Norway for a year and then returned back to Minneapolis. Once she was back in Minneapolis, Therese met her husband, Olaf Pederson, at a Nordland's Club gathering in 1936. Olaf was originally from Vesterdal, Norway but had come to stay with his brother in Minneapolis. They were married on April 16, after which Olaf went west to go fishing in Alaska. Therese stayed in Minneapolis until September and then moved to Tacoma, WA. In Tacoma, she continued to take care of children, and Olaf fished every summer. In 1950, Olaf was paralyzed from a stroke, and he passed away peacefully in 1956. They never had any children. In America, Therese has maintained the cooking and baking of Norwegian foods and has also belonged to Nordlandslaget and the Daughters of Norway. She has returned to Norway on several occasions, and although she is also half-German, Therese thinks of herself as Norwegian and is proud of her heritage.