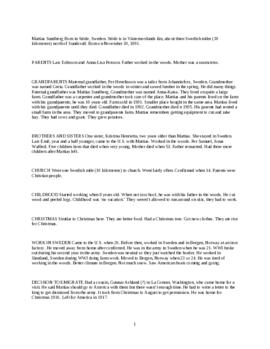 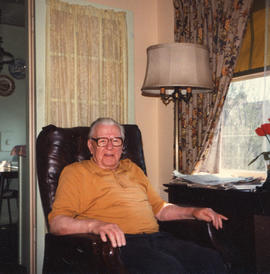 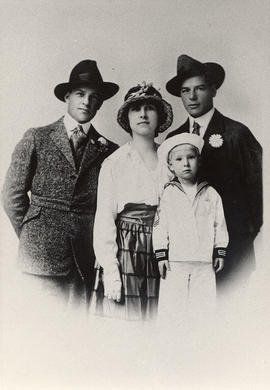 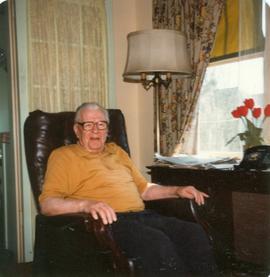 Mattias Sundberg was born in Stöde, Sweden on November 30, 1891. His father, Lars Eriksson, worked in the woods while his mother, Anna-Lisa Persson, worked as a seamstress. Mattias lived with his paternal grandparents on their farm until they died. Mattias has an older sister and three younger brothers, although five other siblings died when they were quite young. After Mattias' mother died when she was 53, his father remarried and had three more children. When he was eight years old, Mattias began working in the woods with his father. As soon as he had been confirmed, Mattias moved away from home and worked in Sweden and in Norway. He joined the army when he was 21 and worked on a farm during World War I. Mattias' cousin encouraged him to move to America where the work was better. Mattias then wrote an appeal to the king to be released from the army, and he moved to America in August of 1917 with his brother. The two Sundberg men met their cousin in La Conner, Washington and began working for him as fishermen. They also worked in lumber and on farms. Mattias came down with the Spanish flu in 1918, at which time he had to take a hiatus from work. Shortly thereafter, he was fairly severely afflicted with rheumatism. In La Conner, Mattias befriended a Swedish family who taught him to bake and cook in their restaurant. He became a cook and found jobs in a variety of places-first in his own small restaurant in Everett, then on fishing boats in Alaska, at the Alaska Road Commissioner's camp, and at a mining camp. Mattias struggled with learning the English language, but he finally did and became a United States citizen while he was in Alaska. Mattias appreciates his heritage but has not been involved in Swedish organizations. He has taken trips to visit Sweden again and maintains that the Swedes are not as polite as they used to be.