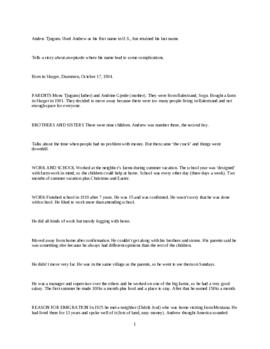 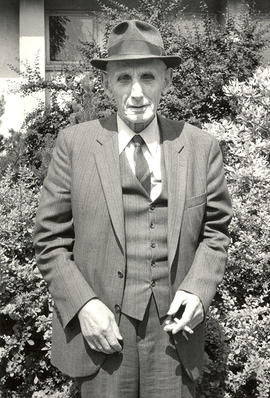 This interview was conducted with Andrew (Anders) Tjugum on June 25, 1984 in Andebu, Norway. It contains information on family background, emigration, settling in, homesteading, marriage, return to Norway, and contact with America but has not been fully translated. Also available are papers entitled 'Slekten 'Losna' Gjennom 700 AaR' and 'Tjugum' and a black and white photograph of Andrew at the time of the interview. The interview was conducted in Norwegian.

Andrew (Anders) Tjugum was born on October 17, 1904 in Skoger, Drammen, Norway, which is in the southern part of the country. His parents were Mons Tjugum and Andrine Gjerde, and there were nine children in the family: Anna, Hans, Anders, Magnus, Synnøve, Marie, Arne, Kari, and Sigurd. After confirmation, Andrew began working for neighboring farms, and in 1926, he decided to immigrate to Montana, where an old neighbor had a homestead. After earning enough money, Andrew eventually bought his own 320-acre homestead near Scobey, Montana, which is in the northeast. In 1956, Andrew made a return trip to Norway and was married to Ruth Magnusson there in 1958. Ruth and Andrew continued to live on the farm in Montana until 1960 and then moved back to Norway permanently. They had no children, and Andrew continued to remain in contact with his friends back in America.