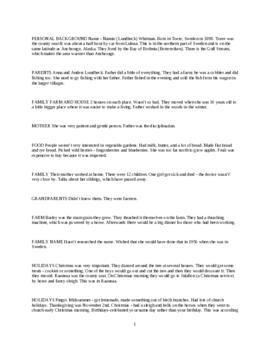 Nannie Whitman was born Nannie Lundbeck in Toere, Sweden in 1898. One of twelve children, Nannie lived on the Lundbeck farm and helped with the chores. The Lundbeck family celebrated holidays like Christmas, Pingst, and Midsummer. Nannie attended school through the sixth grade. She worked one summer in Luleaa, but for the most part, Nannie helped with all the children. She began to think about improving herself, and she was convinced she needed to move away in order to do so. Therefore, in May of 1923, Nannie traveled to America. She sought out her mother's cousin who lived near Hoquiam, Washington and helped Nannie find work helping a local family. Then Nannie found a job at a boardinghouse where she cooked and washed dishes. In 1924, Nannie married Mr. Whitman, whom she had met on the ship over to America. They had three sons. Nannie did some housekeeping and some weaving while her husband worked in the lumber industry. In 1956, they visited Sweden for the first time to visit relatives. Nannie initially tried to maintain Swedish traditions in their home, but the children did not seem to be interested. As a child, Nannie and her family read Lutheran books and occasionally attended the Lutheran church, but now she is a member of the Seventh Day Adventist Church.