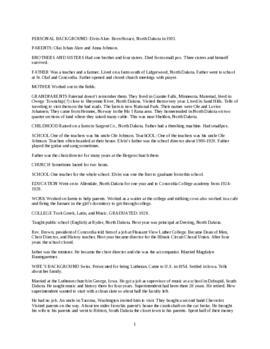 This interview was conducted with Elvin Akre on May 13, 1980 at his home on Lake Cushman. It contains information about family background, education, marriage, teaching at PLC, and receiving the Fulbright scholarship to teach in Norway. The interview also contains two articles about Elvin teaching in Norway and a 'Profiles From the Past' article from PLU's The Scene, 1979.

Elvin Akre was born on March 9, 1903 in Horace, North Dakota to Olai Johan Akre and Anna Lydia Johnson, who were both of Norwegian descent. Elvin had one brother and four sisters, but his brother and one sister died from small pox. The children were raised on a farm south of Lidgerwood, North Dakota. Elvin's father, who had attended school at St. Olaf and Concordia, was a teacher and choir director, and his mother worked in the fields. Elvin himself was also well-educated, attending school in Allendale, North Dakota for one year and Concordia from 1924 - 1928, where he took Greek, Latin, and Music.

Following graduation, he taught English in Ryder, North Dakota for a year and then became the principal at Deering, North Dakota. He went on to become the Dean of Men, Choir Director, and History teacher at Pleasant View Luther College. When the college closed four years later, he got a job teaching English in George, Iowa, where he met his wife, Magdalyn Baumgaertner. Magdalyn's father was the minister at the church where Elvin directed choir. After they were married, Elvin became the music supervisor at a school in Delrapid, South Dakota, where he taught for four years and their son, Grover, was born.

When Elvin and Magdalyn came to Tacoma, Washington to visit Elvin's uncle in 1937, they learned of Pacific Lutheran College. Orville Running, a religion professor there, offered to give the Akres a tour of the school, and Elvin soon met President Tingelstad, who informed Elvin of an opening for the Dean of Men. Elvin obtained the position, and that fall, he and Magdalyn moved into the south end of Harstad Hall. At that time, the boys lived on the south end of the second floor and the girls on the north, the third and fourth floors were vacant, the first floor had the library and classrooms, and the dining area was in the basement. In addition to Old Main (renamed Harstad Hall), a small chapel resided where the Mortvedt Library currently is, and the gym was located where the University Center currently stands. As the Dean of Men, Elvin had to ensure that the boys followed all of the rules, including not going to saloons or taverns, not smoking on campus, and not dancing.

Elvin additionally taught some classes in history. Elvin served as the Dean of Men for 4 - 5 years until Magdalyn fell ill and they had to move off-campus. They moved into a house on 120th Street, and Elvin began to teach band at PLC. By 1938, Elvin had obtained his master's degree from the University of Washington, and in 1954, he received a Fulbright scholarship and went to Norway to teach in several high school throughout the course of one year. Elvin continued to teach history upon his return from Norway and retired in 1972 at the age of 67.