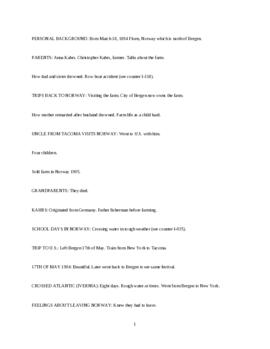 This interview was conducted with Martha Alvestad on May 28, 1981 in Gig Harbor, Washington. It contains information on family background, emigration, marriage and family life, community activities, and Norwegian heritage. Also available in Martha's file are her obituaries from the Tacoma News Tribune (January 22, 1983) and the Western Viking (January 28, 1983). The interview was conducted in English with some Norwegian towards the end of the interview.

Martha Alvestad was born Martha Kahrs on March 18, 1894 in Floen, Norway. Her parents were Christopher and Anna Kahrs. Her father and sister drowned in a row boat accident when Martha was young, and managing the farm was very hard on her mother. She eventually remarried and had four children. When an uncle who lived in Tacoma, Washington came to Norway to visit, they decided to return to Washington with him. They left on May 17, 1904, and the trip over took eight days. Shortly after their arrival, Martha's stepfather died, followed by her uncle one month later. The family then moved to Gig Harbor, where Martha attended school through the sixth grade. After that, she began working as a housekeeper. In 1914, Martha married Robert Alvestad, a fisherman who was of Norwegian descent as well, having emigrated in 1911. Martha and Robert had three children: Agnes (deceased), Catherine (Miller), and Ruth (Irwin). In Gig Harbor, Martha was an avid churchgoer and a charter member of the Peninsula Lutheran Church. She was also a member of the Ladies Aide and Nordlandslaget. Martha visited Norway three times, but had no regrets about moving to America.