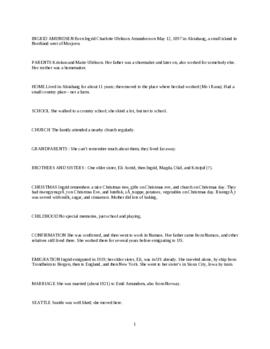 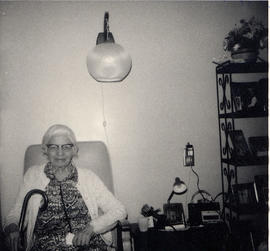 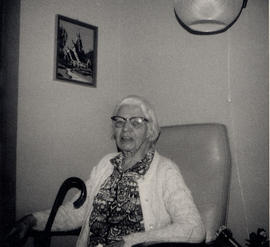 Ingrid Amundsen was born on May 12, 1987 in Alstahaug, Norway, a small island west of Mosjoen, to Kristian and Marie Ulrikson. Kristian was a shoemaker and Marie a homemaker. Ingrid had four siblings: Eli, Magda, Olaf, and Kristjuf. Ingrid has no special memories of her childhood, but remembers Christmas in Norway fondly. On Christmas Eve, they received gifts and had risengynsgroet, and on Christmas Day, they attended church and had lutefisk, soetsuppe, potatoes, and other vegetables. After her confirmation, Ingrid went to work in Namsos, where her father had relatives, and then immigrated to America in 1919 when she was twenty-one. Her older sister, Eli, already lived in America, and Ingrid went to her house in Sioux City, Iowa. Ingrid worked as a domestic, and in 1921, she married Emil Amundsen, who was also from Norway. The couple had two children: Clarence and Ethel and later moved to Seattle, WA. In America, Ingrid attended some Norwegian organizations, but never got very involved. She did, however, continue to attend church regularly with her family.