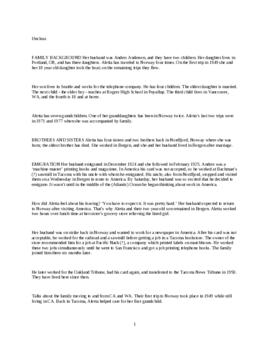 Aletta Andersen was born in Nordfjord, Norway in 1901. Her father was Kristian Josefson, and she had four sisters and four brothers. Her youngest brother died soon after birth. Aletta attended school in the winter and helped on family farms during the remainder of the year. She later married Anders Andersen, a printer, and their first child, Garman, was born on September 3, 1921 in Bergen, Norway. Influenced by his uncle en route to America, Anders decided to immigrate in December 1924. Aletta and Garman followed in February 1925. Ander's first jobs in America were for the railroad and a sawmill, but he later worked for a Tacoma bookstore, a company that printed labels on matchboxes, a telephone book printing company in San Francisco, and The Oakland Tribune. From The Oakland Tribune, he was transferred to the Tacoma News Tribune, where the family then remained. By this time, the Andersens also had a daughter. In America, Aletta became active in the Lutheran church, took part in community activities, and participated in Scandinavian organizations. She returned to Norway, where her family still remained, four times after coming to America.