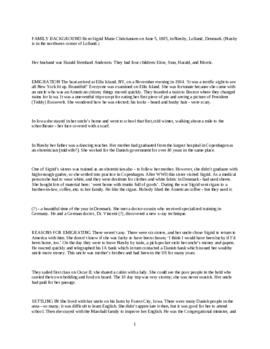 Sigrid Andersen was born in Næsby, Lolland, Denmark in 1885. Her father was a dancing instructor and her mother an obstetrician. Sigrid had five sisters and one brother. She finished seven years of school, not attending high school, and then went on to work for local doctors, learning all that she could. In 1904, Sigrid's uncle, who had been living in America for many years, chose her return to America with him. Once in America, she first stayed with her uncle near Forest City, IA and then stayed with the Marshall family-Mr. Marshall was the Congregational minister-to improve her English. Harald Andersen was a follow passenger of Sigrid's when she immigrated to America, and after he settled in St. Paul, he asked her to join him. After a year in St. Paul, they moved to Tacoma, and in 1907, they were married in the Danish Lutheran Church. In Tacoma, Harald worked for Northern Pacific Railroad and made a good salary, allowing them to have one house in town and one on American Lake. The Andersen's had four children: Elsie, Stan, Harald, and Morris. When all of their sons moved to California, Harald and Sigrid decided to move too. Sigrid has fond memories of selling jewelry at the World Fair in San Francisco. After thirty-five years of marriage, Sigrid divorced Harald. She later settled in Tacoma again.