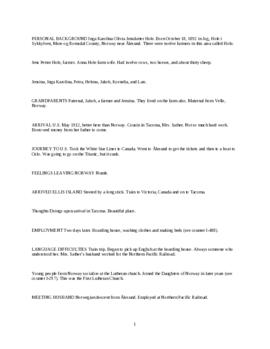 Inga Anderson was born Inga Karolina Olivia Jensdatter Hole on October 18, 1892 in Jog,Hole in Sykkylven, Norway. Her parents were Jens Petter and Anna Hole, and there were six other children in the family: Jensina, Petra, Jakob, Kornelia, and Lars. The family lived on a farm with twelve cows, two horses, and approximately thirty sheep. Inga had a cousin, Mrs. Sather, in Tacoma, WA, and in May 1912, Inga decided to immigrate to America to live with her. Two days after she arrived in Tacoma, she became employed at a boarding house, where her duties included washing clothes and making the beds. In Tacoma, Inga met her husband, Olaf Anderson, who was originally from Ålesund, Norway and worked for Northern Pacific Railroad. Olaf and Inga had two children, Astrid and Arnold, and Norwegian was spoken in their home. Inga also continued to cook traditional Norwegian dishes, including lutefisk, rommegrøt, rullepølse, sylteflesk, bloodpudding, and fiske pudding. For the most part, Inga was a homemaker after she was married, but she supplemented her husband's income by cleaning, catering, and serving meals. Inga was also active in the Daughters of Norway and at Mount Zion Lutheran Church. *Note: The Archive interview sheet refers to Inga having a sister named Petra and a sister named Helena, but they were the same person.