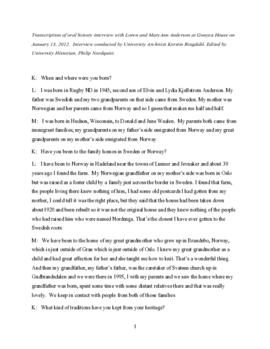 This interview was conducted by Kerstin Ringdahl with Loren and MaryAnn Anderson at the Gonyea House in Tacoma, Washington, on
January 13, 2012. It contains information on family background, schooling, marriage, PLU, and Scandinavian heritage.

Loren J. Anderson was born on July 6, 1945 and was raised in Rugby, North Dakota. He received a Bachelor of Arts degree in philosophy from Concordia College, and a master’s degree in rhetoric and public address from Michigan State University in East Lansing. Later, he earned a doctorate in communication theory and research from the University of Michigan in Ann Arbor. He has also participated in the Institute for Educational Management and the Seminar for the New Presidents at Harvard University in Cambridge, Massachusetts.

Before joining Pacific Lutheran University as president in 1992, Anderson served Concordia College in Moorhead, Minnesota, between 1972 and 1992 as the director of institutional research, assistant professor of speech communication, assistant to the president, vice president for planning and development, and executive vice president. Anderson also worked for the American Lutheran Church between 1984 and 1987, first as its executive direction for the division of college and university services, and later as its national director of the Commitment to Mission Program. Anderson retired from PLU in 2012.

MaryAnn Anderson née Waalen was born in Hudson, Wisconsin, and attended Concordia College where she served on the Board of Regents as of 2022.