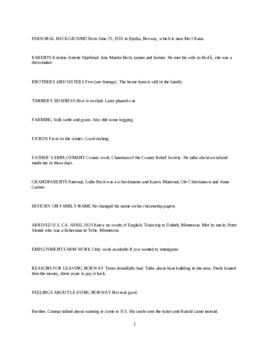 Harold Beck was born Harold Jarle Bech on June 25, 1910 in Bjerka, Norway. His parents were Jens Martin Bech, a tanner and farmer, and Kristine Jonette Skjefstad, a dressmaker. Harold was the sixth of seven children, which included Øyvind, Ottar, Gunnar, Asmund, Solveig, and Ruth. Harold's brother Gunnar originally had the idea to immigrate to America, but when their uncle, Peter Strand, sent a ticket; Harold was the one who went in April 1929. Peter was a fisherman in Tofte, Minnesota. In Minnesota, Harold worked in various towns as a hired hand and store clerk. He then moved to Wisconsin, where he again worked as a store clerk, worked in a factory, and owned his own grocery store. He was also active at the church in Muskego, Wisconsin, singing in the choir and teaching Sunday school. During WWII, Harold was drafted and joined the Navy. He had his training at the Bremerton shipyards, but was stationed in southern California during the war. In 1941, he married Ruth Hildegard Kjendalen, a teacher. Ruth and Harold had two sons: John Harold and Paul Phillip, both of whom attended PLU and speak Norwegian. The family settled in the Pacific Northwest, where Harold got involved with the fishing industry. Due to the restrictions it imposed on his family life, he later gave up fishing and went into construction work in Marysville, Washington. There, Harold became involved with the Bethlehem Lutheran Church and worked with the Sunday School as well as being the president of Marysville PTA, a member of the Sons of Norway, and participating in the Everett Male Chorus. When he retired, Ruth and Harold moved to Tacoma, where he served as the vice-president of Nordlandslaget. Through the years, Harold kept in touch with his relatives in Norway and continued to celebrate the 17th of May.