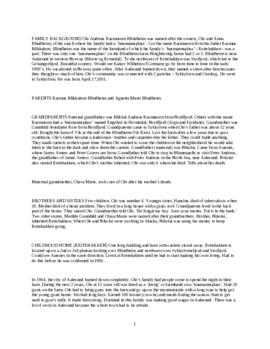 Ole Andreas Rasmussen Blindheim was born on April 17, 1891. Blindheim was the name of the farm of which his family's 'husmannsplass' (cotter's farm) was a part. Ole's mother inherited the farm, Reitebakken, from her father, Nikolai. Ole's family consisted of five children, Ole being the fourth. His mother died of heart problems when he was four years old, and Ole's maternal grandmother, Olava Marie, raised him. Ole learned a lot about farming from his grandfather and got his first job as a farmhand at the age of thirteen. He lived at Reitebakken until he had to start making a living of his own, which he had to do before could be confirmed in 1906. When Ole was fifteen, his grandmother died, and he was responsible for her funeral. In 1908, he decided to immigrate to America with his friend Lars Olsen Vik (Louis Vik when he arrived in America). Ole had no knowledge of the English language, and when they arrived in America, Louis served as translator. From Ellis Island, they took the train to San Francisco, California and got their first job loading railroad ties. The next year, they went to Alaska to mine with Ole's brother Nikolai. In 1913, Ole left Alaska for Seattle, where he started a dairy farm with his friend Ole Lowell. The dairy farm was successful and lead to Ole meeting his wife, Anna. Anna's father was also in the dairy business, and after a 7-8 year courtship, Ole and Anna were married August 30, 1919. Anna and Ole had two children, Agnette Wilhemina and Alvin Louis. Ole became an active member of the community, participating in several clubs including the Sons of Norway, of which he was a member for fifty years. However, his main interest was the Norwegian Commercial Club, which he helped organize and in 1930-31 was appointed its tenth president. Ole never regretted coming to America.