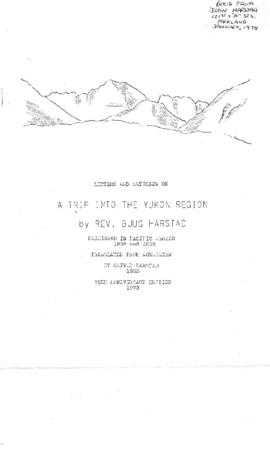 The founder of Pacific Lutheran University, Bjug Aanondson was born on December 17, 1848 on a farm named Harstad in Valle, Setesdal, Norway. His father was Aanond Tellefson AAkre and his mother was Torbjør Kittilsdatter Harstad He was one of ten children and they lived on a farm called Gangshei above Harstad. his family was very poor. Young Bjug took care of the cattle at the family farm during the winter months and in the mountains during the summer months. Bjug and his family emigrated to America in 1861 and settled in Illinois and Minnesota. He continued his education in the US and was accepted as a student at Luther College in 1865. It was there that he changed his last name to Harstad upon a suggestion of the president of the college. He studied theology at Concordia Seminary in St. Louis from 1871 to 1874 and it was his experiences there that became the model for the rest of Bjug's scholarly and religious life. After seminary, he traveled as a pastor to remote places in Minnesota where he built schools and churches. Bjug Harstad was married February 14, 1877 to Guro Omlid in Minnesota. She was a native of Valle and ws born September 29, 1858. In 1889, the church sent Bjug Harstad to the Pacific Coast. He visited Portland, Seattle and Tacoma and when he returned to Minnesota, it was decided that Brookdale, as Parkland was called then, should be the important Lutheran education center of the Northwest. The Pacific Lutheran University Association was incorporated December 11, 1890 with Bjug Harstad as president. The cornerstone for the first building, Old Main, was laid October 4, 1891. The occasion of the cornerstone was a grand event. Several Lutheran pastors spoke both in Norwegian and in English and the president of the Norwegian Synod sent greetings with his hope that the undertaking would succeed. Old Main was renamed Harstad Hall in 1960 in honor of Bjug Harstad. In 1917 the Norwegian Synod that Pacific Lutheran University was founded under, merged with the United Church, and the Hauge Synod to celebrate the four hundredth anniversary of the Reformation. Harstad refused to join the new Norwegian Lutheran Church, thus formally separating himself from the school he had founded. Bjug Aanondson Harstad died on 20 June 1933 at age 84. His wife Guro, eight of his children, and eleven grandchildren survived him.