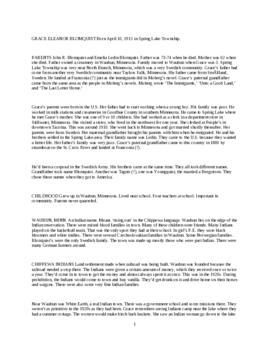 The interview was conducted with Grace Blomquist on May 15, 1980 in Tacoma, Washington. This interview contains information on Swedish heritage, education, and PLU history.

Grace Eleanor Blomquist was born in Spring Lake, Minnesota on April 10, 1913. Grace was the oldest of eight children born to John and Emelia Blomquist. Growing up in Waubun, Minnesota, Grace was exposed to Swedish and Norwegian language through her own family and through the surrounding communities. She had participated in the Lutheran church in her town, so when she graduated from high school, she chose to attend a Lutheran college-Concordia College in Moorhead, Minnesota.

Grace graduated in 1934 and began teaching English and Latin that year in a North Dakota high school. After three years of teaching there, Grace accepted an assistantship at Syracuse University and earned her master's degree. She went on to teach and to serve as Assistant Dean of Women at Pacific Lutheran University. From 1952 to 1953 Grace was the president of the American Association of University Women.

Grace Blomquist traveled extensively throughout Europe, once in conjunction with a children's literature course she taught at PLU. She retired from PLU in 1975. Although Grace grew up in a Scandinavian community, she doesn't retain many customs of her Swedish heritage. However, she would like to visit Småland, the area whence her grandparents came.