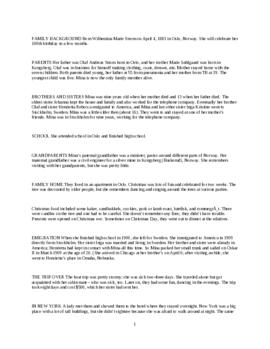 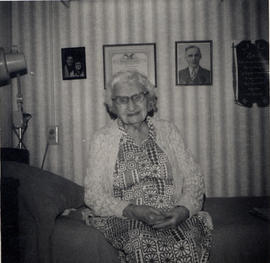 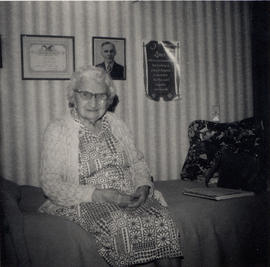 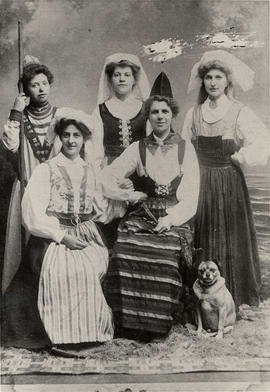 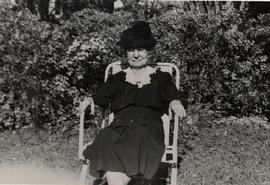 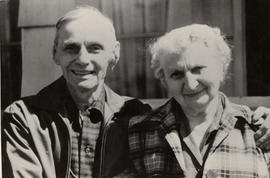 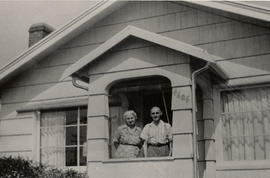 This interview was conducted with Mina Borresen on January 14, 1983 at the Foss Home in Seattle, Washington. It contains information about family background, emigration, work, marriage, community activities, and Norwegian heritage. Mina was almost 100 years old at the time of the interview. Also included are photographs of Mina in traditional Norwegian dress, Mina in Seattle, Mina and her husband, and Mina at the time of the interview. The interview was conducted in English.

Mina Borresen was born Wilhelmina Marie Strom on April 4, 1883 in Oslo, Norway. Her parents were Olaf Andreas Strom, a clothing maker, and Marie Sahlgaard, who stayed home with the children. There were seven children in Mina's family: Johanna, Henrietta, Inga, Olaf, Mina, and two boys who died. Mina was only nine when her mother died, and her father died when she was thirteen, leaving Johanna to raise the family. Mina finished high school in Oslo and then went to Stockholm, Sweden, where she worked for a telephone company for nine years. In 1909, Mina decided to immigrate to America, where Henrietta and Olaf already were. Henrietta lived in Omaha, Nebraska and owned a millinery store with her husband. Mina stayed with them first before moving to Chicago, where she lived with Olaf and worked at a nursing home. In 1917, Mina moved to Seattle, Washington and married Bernhard Borresen. Bernhard was a fisherman whom Mina knew from Oslo, and they had corresponded several times since Mina's arrival in America. Bernhard and Mina were married as soon as Mina got off the train from Chicago. They lived in a large house with many chickens, and Mina never worked outside the home again. In 1919, their only son, Roy Bernhard, was born. The family eventually moved to Ballard, where they lived until Bernhard died after the age of eighty. Mina then rented an apartment on Phinney Ridge and later moved into the Foss Home. Mina was never active in any Norwegian organizations but did attend a Lutheran church. Mina felt she was more American than Norwegian, but did continue to cook some traditional Norwegian dishes and taught Roy several Norwegian words. She never returned to Norway.