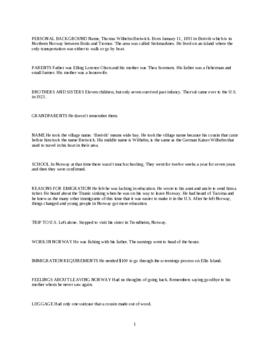 This interview was conducted with Thomas Breiwick on September 14, 1982 in Seattle, Washington. It contains information about family background, emigration, work, marriage, church and community activities, and Norwegian heritage. The interview also includes a brief autobiography, a catalog from Kolstrand Supply Company, and an article from the Western Viking concerning Thomas's ninetieth birthday. The interview was conducted in English.

Thomas Breiwick was born on January 11, 1893 in Breivik, Stokmarknes, Norway to Elling Lorence Olsen, a fisherman and small farmer, and Thea Bergitta Sorensen, a homemaker. There were eleven children in Thomas's family, but the first four died shortly after birth. Thomas's remaining siblings were Sophia, Olga, Emma, Emil, Sigrid, and Thorval. Thomas attended school for seven years and then fished with his father. Feeling that he was lacking in education and opportunities, Thomas decided to emigrate when he was seventeen years old in 1912. He had an aunt and uncle in Tacoma who lent him the money for a ticket. After arriving in Washington, Thomas got a job at a sawmill in Selleck and later did road construction in Tacoma. Thomas's uncle was a mechanic for Northern Pacific Railroad, but when he grew tired of working in the shop, he invited Thomas to start fishing with him. As it turns out, Thomas's uncle did not like it, but Thomas continued fishing for the next thirty-five years. He eventually owned nine boats. Five years after Thomas emigrated, his girlfriend from Norway, Dagmar Tekle, decided to join him. They were married and had four children: Arnold, Lester, Eleanor, and Ruth. In Tacoma, Thomas was also one of the founders of the Assembly of God Church on Union Street. When the family moved to Seattle, he also served as the deacon at the Assembly of God Church there, as well as being a member of Nordlandslaget. In Seattle, Thomas and his son bought Kolstrand Inc., a fishing supply business that had previously belonged to a friend of Thomas's. The business is still in the family and is now run by Thomas's grandson. Thomas has returned to Norway seven times and continues to keep in touch with his relatives there. He believes in the importance of heritage, and all of his children have been to Norway and can understand the language.