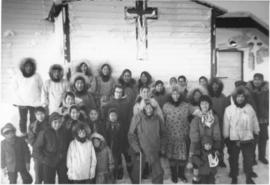 On August 1, 1894, Rev. Tollef L. Brevig and his wife Julia and child Carl arrived at what was known as the Reindeer Station, later known as Teller Mission prior to its official naming as Brevig Mission. What his job was is best told by a quote from his printed diary, “Apaurak in Alaska” (published by Dorrance and Co. Philadelphia, translated from the Norwegian by Dr. J. Walter Johnshoy): ‘An inquiry came from theRev. H. A. Preus, president of the Norwegian Lutheran Synod, whether my wife and I would be willing that I go as pastor of Norwegian Lapps, whom the government was importing to northern Alaska for the purpose of teaching the Eskimos the art of reindeer raising. It was also understood that I should function as teacher in the government school which would be organized among the natives. Permission was likewise granted that I should be privileged to preach the Gospel of Christianity to them.’ Of the time of his wife’s passing, Rev. Brevig wrote, “As there was no other Protestant minister available, I had to preach the funeral sermon and perform the committal. In spite of the bitter cold, virtually all thepeople from Teller attended. Thus the mission’s kindly ministering spirit passed on. She rests in the land of the people whom she loved so much, for whom she died. There sleep my son, my daughter,and my wife in the frozen Northland.” Pastor Brevig served here from 1894 – 1917, being absent 1908 – 1913. March 10, 1908 his wife died, earlier their small son Carl and daughter Borghild also died. All three are buried at Brevig Mission.