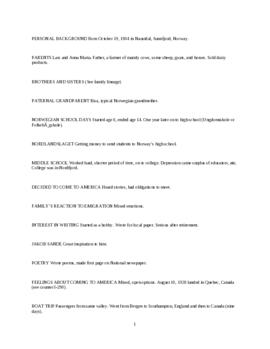 Arnfinn Bruflot was born on October 19, 1904 in Naustdal, Sunnfjord, Norway to Lars Henrik Bruflot, a dairy farmer, and Anna Maria Gjengedal. Arnfinn had five older siblings: Nikolai, Jakob, Reinhart, Andreas, and Albert. Arnfinn began school at the age of six and went on to high school, middle school, and college. In 1928, he decided to immigrate to America, where he settled in Tacoma, WA. There, he was first employed at St. Paul Lumber Mill and was later employed as a painter. In the 1930s, he obtained an editing job at the Western Viking, a Norwegian newspaper. In addition to editing, Arnfinn wrote editorials, did artwork, and supervised. In 1948, Arnfinn married Ingrid Grolid and had one son, Norris. Arnfinn had always had an interest in writing, and after he retired, he began to write more seriously. He has published four poetry books and a novel, including Juni-baten - 1969, Det Storkna Havet - 1970, Praeriekveld - 1973, Dei Kom til Amerika - 1975, and Inn I America - 1980. His writing is aimed at social developments and has received good reviews. Arnfinn believes that Norwegian heritage is very important and a good influence, and he has participated in the Sons of Norway, Nordlandslaget, and Northlight - Unique Light of Northern Norway. He has also been a member of the First Presbyterian Church. Arnfinn feels that America has given a lot to him, and he has no regrets about immigrating.