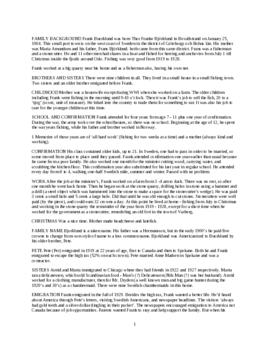 Frank Buorklund was born Thor Franke Björklund on January 25, 1904 in Tosene, Sweden. Frank was among nine children living in the small fishing town where his father, Frans Björklund, was a fisherman and stonecutter. Frank attended school for four years and spent one year studying for his confirmation. At the age of 12 Frank had to commit himself to working; he worked as a fisherman, a housekeeper, and a stonecutter. Tired of the high taxes and wanting a better life, Frank traveled to the United States aboard the 'Stockholm' in 1929. He got a job with his brother Pete in construction, but his lack of English skills hindered his work. For a short time he and his brother tried mining for gold in Idaho. In 1931, Frank married Elsa Eklund, whom he met in Sweden before they both emigrated. They bought a house in Spokane, Washington in 1934 and had two children, Stanley and Sonja. Elsa and Frank have visited Sweden regularly and can still read, write, and speak the language.