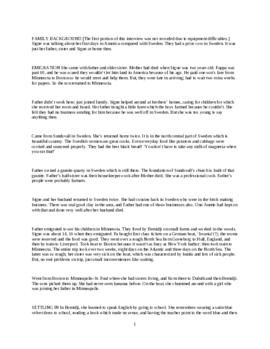 These interviews were conducted with Signe Carlson on March 27, 1978 and April 17, 1979 in Tacoma, Washington. It contains information on personal background, emigration, settling in, marriage, Swedish customs, and the Swedish language. The interview was conducted in English.

Signe Amalija (Ohberg) Carlson, the youngest of nine children, was born on August 20, 1887 in Sundsvall, Sweden. Signe came to America with her father, a granite quarry owner, around 1903. They lived on a small farm in Bemidji, Minnesota, where Signe learned English and worked as a babysitter and a hairdresser.

Signe moved to Minneapolis and attained her citizenship before moving to the Tacoma area to be near her sisters. Signe worked at Thorson's until she married Anton Carlson. Anton, who worked in the lumber business, owned 20 acres on McNeil Island, so Signe moved there where they had two children.

Since both Signe and her husband were quite young when they emigrated from Sweden, they did not retain many Swedish customs. However, Signe can still speak Swedish and has attended some Valhalla celebrations. She and Anton returned to Sweden twice to visit family members. Signe has been a member of First Lutheran Church for many years.