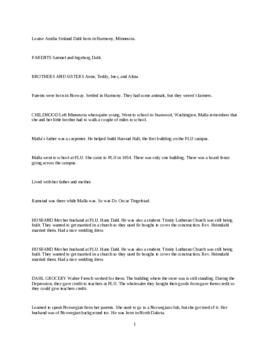 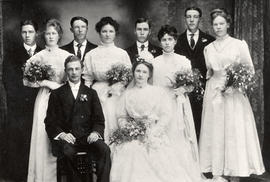 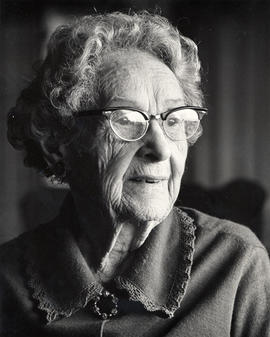 Malla Dahl was born Louise Amilia Sinland Dahl in 1888 in Harmony, Minnesota. Her parents, Samuel and Ingeborg Dahl, were of Norwegian descent, and there were four other children in the family: Anne, Teddy, Inez, and Alma. The Dahls left Minnesota when Malla was young and moved to Stanwood, Washington. Samuel was a carpenter and helped construct Harstad Hall, Pacific Lutheran University's first building.

Malla later attended PLU, and her extracurricular activities included golf and basketball. In 1907, she was the captain of the women's basketball team. Dr. Anders Ramstad and Dr. Daniel Tingelstad were also at PLU while Malla was, and she later became friends with Agnes and Ole Stuen as well. In addition, Malla met her husband, Hans Dahl, at PLU. Hans was also of Norwegian descent and was born in North Dakota.

Malla and Hans were the first couple to be married in Trinity Lutheran Church, which is located on the corner of 121st and Park near PLU and was still under construction at the time. Hans owned Dahl's Peanut Butter Factory, and after it burned down, he and Malla opened Dahl's Grocery. In 1977, sixty-nine years after she completed her studies at PLU, Malla went through the actual graduation ceremonies. At the time of this interview, Malla was PLU's oldest living alumni.