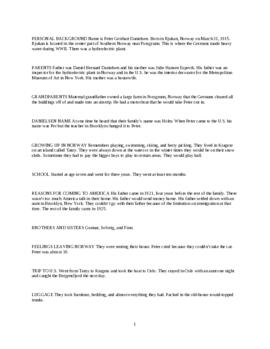 Peter Danielsen was born on March 31, 1915 in Rjukan, Norway to Daniel B. Danielsen, an inspector for a hydroelectric plant, and Julie P. Hansen Espevik, a homemaker. Peter had two older siblings, Gunnar (George) and Solveig, and one younger, Finn. In 1921, Peter's father immigrated to Brooklyn, NY, where he lived with an aunt and worked as an interior decorator for the Metropolitan Museum of Art. Due to immigration limitations at the time, the rest of the family could not join him until 1925. The family settled in the Bay Ridge area, which was a Scandinavian community, and rather than attending regular school, the children went to classes simply to learn the English language. After one year, Peter felt comfortable speaking English and enrolled in regular school. He also began working as soon as he could. He did deliveries and worked in a soda shop. In America, the family continued to keep Norwegian traditions and began attending Bethany Lutheran Church in Brooklyn. To Peter, the Church felt like a second home, serving as a source of encouragement as well as a place for social activity. When he got older, Peter worked on Wall Street in an accounting department and as a runner and was also a clerk at the Bethlehem Steel Shipyards. In 1942, he enlisted in the Army and served for three years, following, which he attended and graduated from Long Island University. In 1948, Peter decided to move to Alaska, where he stayed for one year and worked for Birch Johnson Telecorporation, after which he took a job with the military government in the South Pacific for two years. On his way to Alaska, Peter had stopped in Seattle, WA, and that was where he first met Helen Field. Helen and Peter were later married in Moorehead, MN, where Helen was from. Helen was half Norwegian and half Danish. In 1952, Peter and Helen moved to the west coast, where Peter worked for the Food King chain and then for the post exchange system out of Fort Lewis, WA and Portland, OR. In 1969, they moved to Alaska and taught school for eight years. Peter taught the fourth grade, some business classes, accounting, and on-the-job training programs, while Helen taught elementary school and home economics. Peter and Helen have returned to Norway once and continue to cook traditional Scandinavian foods as well as using the Norwegian language. They also attend Bethlehem Lutheran Church in Tacoma, and Peter is a member of the Sons of Norway.