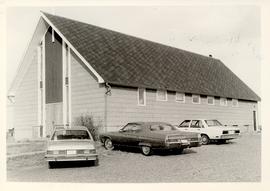 This congregation was organized under the leadership of Rev. J. O. Ronsberg, who had come to the area in 1913. He was a homesteader who had filed on land south of the Marias River. In October, 1929, the call was divided and the Devon congregation was included in the Shelby call. Up until 1934 services were held in a schoolhouse. A new church was built and the first service was held February 4, 1934. In January of 1941, Devon was combined into one parish with Galata, Trinity, and St.Olaf. A new church was completed on November 28, 1957.