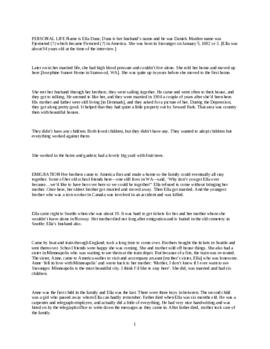 Ella Duus was born on January 5, 1882 or 83 in Stavanger, Norway. Her father was a carpenter and telegraph employee and died when Ella was only six months old. Ella had three older brothers and two older sisters, but the younger of the two sisters died young, and Ella can hardly remember her. Ella's brothers came to America first and made a home for the family in WA, but Ella's oldest sister, Anne, decided to settle in Minneapolis while visiting an aunt there. Ella emigrated around 1902 with her mother when she was nineteen, and her mother died not long after the journey. Once in America, Ella met her husband through her brothers. They were married in 1904, and Ella eventually became an American citizen through him. Ella and her husband were married for sixty-four years and never had any children. After he passed away, Ella returned to Denmark to visit his family, but she never returned to Norway.