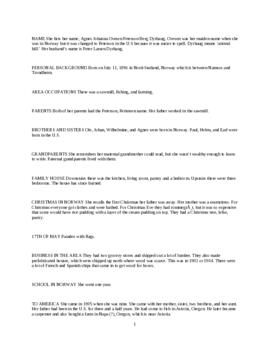 This interview was conducted with Agnes Dyrhaug on May 21, 1982 in Portland, Oregon. It contains information concerning family background, emigration, work, marriage and family, community activities, and Norwegian heritage. The interview also includes an article in Norwegian from the Western Viking concerning Agnes's eighty-fifth birthday and her nomination to Gerda Farestrand's committee on the Oregon Arts Commission. The article also gives an overview of Agnes's life, including emigration, schooling in Astoria, Washington, marriage, involvement in Scandinavian organizations, meeting Crown Prince Olav, and employment with Nordic Ware and Chicago Cutlery. The interview was conducted in English.

Agnes Dyrhaug was born on July 11, 1896 in Nord-Statland, Norway to Anton Peterson and Jette Krestine. Anton worked in a sawmill, and there were three other children in the family: Ole, Johan, and Wilhelmine. Agnes immigrated to America in 1905 with her mother, sister, two brothers, and an aunt. Her father had immigrated three and a half years earlier and lived in Astoria, OR, where he had originally come to fish and later became a carpenter. The World Fair was in Portland, OR the year Agnes and her family came, and due to the large number of travelers, the immigrant coaches of the train were left behind in Minnesota when the train got too long. After two weeks of travelling, they finally reached Astoria. In Astoria, Agnes's other siblings, Paul, Helen and Earl, were born, and the family bought a farm in nearby Napa, OR. Agnes attended school for eight years and also took a commercial course, after which she began bookkeeping for Haukes. Agnes met her first husband, Marinus Berg, in Astoria and was married in 1917. Marinus was also of Norwegian descent and worked as a carpenter and a contractor. They continued to live in Astoria for five years and had two children, Maurice and Bonita (Foster), before moving to Portland. When Marinus got sick, Agnes began managing apartments and later worked for the Portland Housing Authority. Marinus passed away in 1939, and Agnes later remarried Peter Dyrhaug. In Portland, Agnes attends Holy Trinity Lutheran Church and is a member of the Sons of Norway. She has also been a demonstrator for Nordic Ware and Chicago Cutlery, which involved demonstrating making Norwegian foods from Seattle to San Francisco, CA. Agnes has returned to Norway twice and believes that her Norwegian heritage is very important.