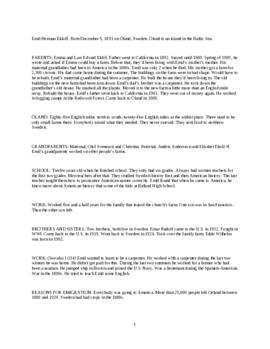 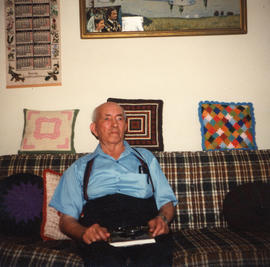 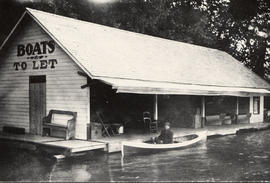 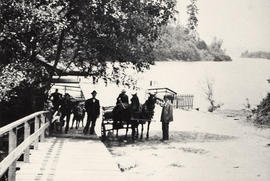 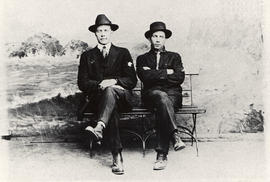 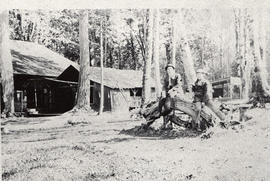 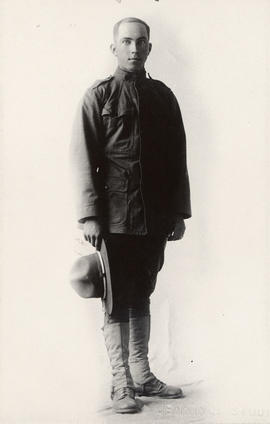 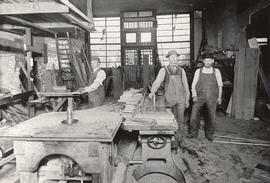 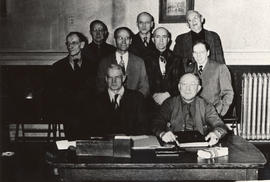 The interview was conducted with Emil Ekloff on May 13, 1982 in Seattle, Washington. This interview contains information on personal background, emigration, settling in, jobs, marriage, World War I, cabinetwork, family, and Swedish heritage. The interview also includes photographs of Emil Ekloff in Bellevue, WA (1910), Emil at Fortuna Park on Mercer Island (1911), Emil in San Francisco (July 4, 1918), Emil in August 1918, Emil working at a cabinet shop in Seattle, Washington, Emil with the Millman Union, and Emil at the time of the interview. The interview was conducted in English.

Biographical Information Emil Herman Ekloff was born on December 5, 1891 on the island of Öland, Sweden. Emil's father, Lars Edvard Eklöf, lived in California for several years at a time from 1892 to 1908. Emil lived with his mother and his grandparents during that time until his father returned to Sweden and established a farm. After attending school until he was 12 years old, Emil worked on a family farm for five and a half years. Emil decided he wanted to be a carpenter, though, when he worked with a carpenter over the summers. Attracted by a new life in America as many others from Öland were, Emil left for America with his father's cousin in 1910. They arrived in Seattle three weeks later, and Emil found work at a logging camp, at a local Danish man's new house, and at a dance hall in a park. The owner of the park, Charlie Lindmark, wanted Emil to go to school, so he provided teachers and housing for Emil. In 1911, Emil began working in carpentry for a Swedish man in Seattle. When business dwindled, Emil found other jobs like working in logging camps, baking in a restaurant, and building roads. Immediately after obtaining his citizenship, the U.S. Army drafted Emil and placed him in a trade school in Oakland. While in California, Emil married Della, whom he had met in Seattle. When Emil finished his military service, he and Della moved back to Seattle where he resumed his work in carpentry. They had three children and lived in a house that Emil built. The Ekloff family attended church regularly and although they never visited Sweden, they maintained pride in their Swedish heritage. Emil can still speak Swedish, and he is a member of the Vasa Lodge, the Swedish Club, American Legion, the Horse Shoe Grange in Bothell, and the Eagles. Della still cooks Swedish food like kroppkaka, rice pudding, and potatis pannkakor. Emil and Della moved onto a five-acre piece of land near Bear Creek, Washington when they retired.