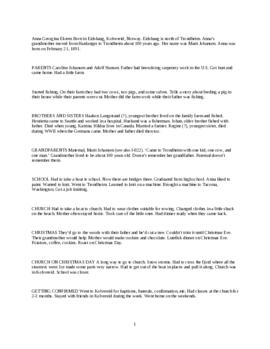 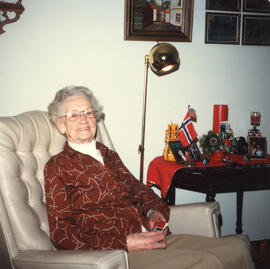 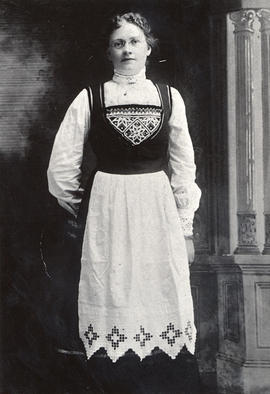 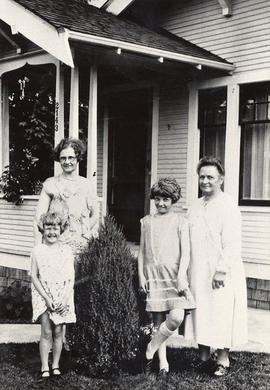 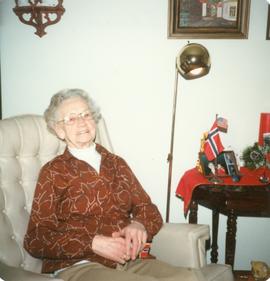 Anna Ekrem was born on February 21, 1891 in Eidshaug, Kolvereid, Norway to Adolf Hansen and Caroline Johansen. Adolf was a fisherman and Caroline took care of the family's farm when Adolf was out fishing. Anna had six siblings: Haakon, Henrietta, Johan, Katrina, Hildur, and Regine. Anna was confirmed in Kolvereid, where she had to stay with friends during the week for two - three months in order to attend classes at the Church. Following confirmation, Anna graduated from high school and then went to Trondheim to learn how to knit.

Anna worked in Trondheim for three years and then immigrated to Tacoma, Washington with her Aunt Maren in 1914. On the their way to America, Anna's boat was stopped by the Germans, who knew that three English boys were stowing away. Rather than searching the boat, the Germans stayed for seven days, knowing that the boys would eventually starve to death. When Anna first arrived in America, she stayed with another aunt of hers in Arlington, Washington for two months and then rented an apartment in Tacoma.

In Tacoma, Anna got a housekeeping job for a wealthy Norwegian couple on Point Defiance, and then obtained a knitting job. She also joined Nordlandslaget and the Sons of Norway. At a Christmas get-together, she met her husband Ole Ekrem, who was originally from Ålesund, Norway and had come down to Tacoma from Alaska for the winter.

Pastor Ordal married Ole and Anna in Tacoma on November 16, 1917, and they moved to Petersburg, Alaska after Christmas. In Alaska, Ole worked at a marble quarry, but while buying fish at the dock one day, he tried to help someone with a hoist and injured his arm. The doctors were going to amputate his arm, but a young doctor from Chicago decided it was not necessary. Nevertheless, Ole has never been able to fully use his arm after the injury. Having studied nursing in Tacoma, Anna was working at the hospital while Ole was admitted there, but after he got out, she began working in a fish house and Ole eventually began cooking at logging camps during the winter.

In Alaska, Anna joined both the Sons and Daughters of Norway and also attended the Lutheran Church in Petersburg. In 1919, Ole and Anna had their first daughter, Caroline, and in 1924, their daughter Phyllis was born. Anna continued working, and in 1942, the family moved to Seattle so the girls could attend college. Caroline attended Pacific Lutheran University. In 1961, Ole and Anna returned to Norway for five months, and Anna observed many changes, particularly in the way people dressed. At home, she continues to speak Norwegian on occasion as well as cooking some traditional Norwegian foods.