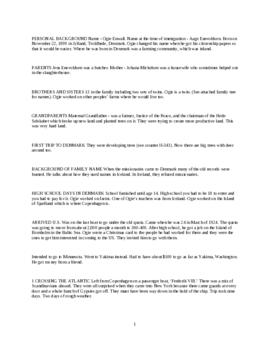 Ogie Enwall was born on November 22, 1899 in Troldhede, Denmark to Jens Enevoldsen and Johana Mickelsen. Jens was a butcher, and Johanna was a housewife. Ogie had twelve siblings: Jenssine, Mette, Enevold, Jens, Peder, Niels, Sofus, Axsel, Harry, Arthur, Rudolf, and Oda. Ogie attended school until he was fourteen, and then began working on farms to pay for high school, which you had to be eighteen to enter. In March of 1924, Ogie immigrated to the United States, where he took the train from New York to Yakima, Washington. Ogie soon found a job on a farm in Roy, Washington and worked in exchange for ten cows. With his cows, he rented a farm and stayed there for ten years. In 1932, Ogie bought a farm in Eatonville, Washington and began dairy farming. He married Mary Shaw the following year, and they had three daughters: Doris, Evelyn, and Mary Ellen. Through the years, Ogie has been a member of Ohop Mutual Light Company's board, Fire District 15, which he helped start, and the Danish Brotherhood. He has also attended Bethany Lutheran Church on Mountain Highway. Ogie has returned to Denmark three times and does not think he could live there again. He is proud of his home country but is also proud to be an American citizen.