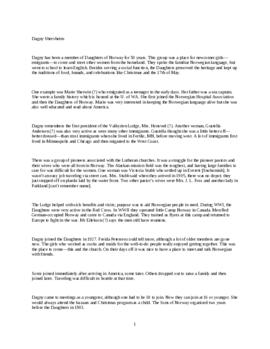 Dagny Shervheim joined the Daughters of Norway in 1927. She had attended their bazaars and Christmas programs as a child but had to be eighteen before she could become a member. In the beginning, the Daughters of Norway primarily served as a social function, allowing women to preserve their Norwegian heritage and keep up with traditions and celebrations. The Lodge also helped with sick benefits and took an active part in aiding people during the world wars. During WWI, the Daughters were active in the Red Cross, and during WWII, they operated a Camp Norway in Canada, which served as a refuge to men who fled German-occupied Norway and immigrated to Canada via England.

Alice Ericksen joined the Daughters of Norway in 1939 and took office in 1951 to get to know people better. During the interview, she discussed the two Daughters organizations, Eastern and Western. The western organization was founded in 1908 under the name of the Daughters of Norway on the Pacific Coast. At one time, there were 29 lodges, but only 10 existed at the time of this interview. In 1941, the Eastern Daughters decided to merge with the East Sons of Norway, but the Western Daughters declined when invited by the West Sons, wanting to preserve their own identity. According to Alice, the merging was very controversial. The Valkyrein Lodge, where Dagny and Alice attend, is the oldest of Western Lodges, celebrating its 75th anniversary in 1980. The Lodge's goals have changed throughout the years, striving to focus more on the whole community rather than just the Norwegian population. The Lodge is now a member of the Seattle Historical Society, a contributor to the Seattle Symphony, and a presenter of cultural displays.