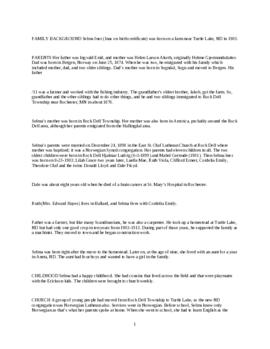 This interview was conducted with Selma Erickson on July 2, 1979 in Seattle, Washington. It provides information on Selma's family background, her experiences as a teacher and a nurse, her return trip to Norway, and her interest in genealogy. The interview also contains five papers by Selma ('Scandinavian Contributions to the American Revolution and the Declaration of Independence,' 'My Family Record, with Emphasis on the Halling-side,' 'The Ingvald E. Erickson Family,' 'Selma Erickson Writes of Christmas in Zululand,' and 'My Childhood on the Farm in North Dakota'), a poem by Selma entitled 'A Visit to My Birthplace,' Selma's family tree, and two letters from Selma to the interviewer, Janet Rasmussen.

Box 2, File 2A Correspondence and Forms
Checklist and Release Form
Letter from Selma Erickson to Janet Rasmussen about her participation in the project.
Handwritten Tape Archive Sheet and Family Background

Box 2, File 2B Memoirs
“Selma Erickson Writes of Christmas on Zululand”
“Scandinavian Contributions to the American Revolution and the Declaration of Independence”
“My Family Record, with Emphasis on the Halling-Side”
“The Ingvald E. Erickson Family”
“A Visit to My Birthplace”
Family tree from the Seattle Genealogical Society
“My Childhood on the Farm in North Dakota”

The daughter of Norwegian and Norwegian-American parents, Selma Inez Erickson was born in 1903 in Turtle Lake, North Dakota. Selma was the third child out of eleven. Her father was born in Bergen, Norway and immigrated to Rock Dell Township in Minnesota when he was two. Her mother, also of Norwegian descent, was born in Rock Dell Township. While in North Dakota, Selma's father farmed on a homestead, but after ten years with only one good crop, the family moved to Osakis, Minnesota, where Mr. Erickson worked as a carpenter.

When Selma was seventeen, she took her fourth year of high school as teachers' training and began teaching at Osakis High School. She worked in the Osakis area for three years and then went on to teach for two years in Rochester and one in a Cherokee Indian School in Oklahoma. Encouraged to become a nurse, Selma began training at Deaconess Hospital in Minneapolis, MN when she was twenty-five. Nurses were in demand at this time, and she worked as a private nurse in Osakis, Alexandria, and other places in Minnesota. Following this, Selma studied at the Lutheran Bible Institute in Minneapolis and decided to become a mission nurse.

She was stationed in South Africa at a dispensary-store for seven years, where she lived with special patients and some younger native girls. The special patients Selma cared for were a set of triplets born prematurely to a local Christian family. Selma considers the time she spent in South Africa as the highlight of her life. She finished her mission work in 1945 and then returned to Portland, Oregon, where her parents lived and continued nursing in Oregon, Washington, and California.

After returning to Rock Dell to visit her grandfather, Selma became interested in genealogy. When she moved to Seattle in 1957, she joined the Genealogical Society at the Seattle Public Library and in 1966, became the chairman of the Scandinavian interest group. Selma celebrates her own Scandinavian heritage by continuing to cook special dishes and speaking and writing Norwegian.