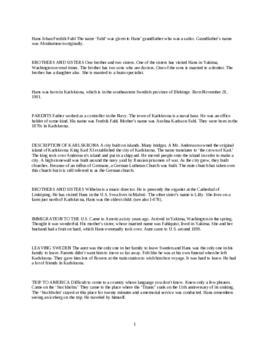 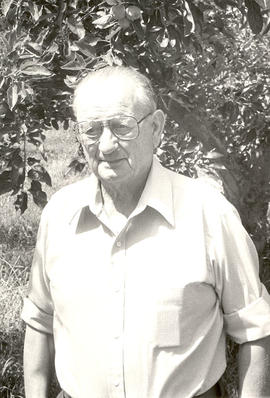 Hans Johan Fredrik Fahl was born on November 28, 1901 in Karlskrona, Sweden. His parents, Fredrik and Axelina Fahl, had three other children, Arthur, Lilly, and Svea. Hans spent much of his time on the water while he lived in the island city of Karlskrona, and he served in the Navy after attending grade school and high school. Karlskrona had a very close-knit community, so it was difficult for Hans to leave and move to the United States in 1923. However, he wanted to broaden his horizons and found that traveling to America would be the best way to do it. After taking the 'Stockholm' and riding aboard a train for four days, Hans met his aunt and uncle who owned a fruit orchard in Selah, Washington, just north of Yakima. He liked the climate and the prospect of farming, so Hans settled there. Anxious to become a citizen, Hans filled out his citizenship papers only a few days after his arrival. He also immediately undertook teaching himself to speak English, despite the fact that there was such a large Swedish population in Selah that he could get by without English. Hans worked on his aunt and uncle's apple orchard and eventually took it over for them. During the 1940s, Hans met his wife Ruth Erikson, who was a widow with two children. Ruth and Hans have traveled to Sweden several times, and although they do not normally speak Swedish to each other, they do speak it when they travel. Hans has been quite involved with the Lutheran Church, serving as a delegate several times, and that has provided him with the opportunity to travel throughout the United States as well.