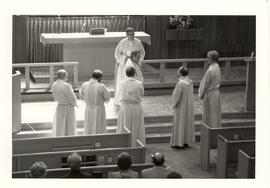 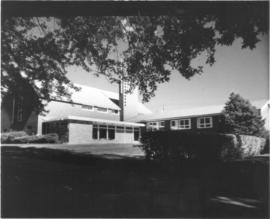 In 1919 W. A. Zundle, Montana Field Missionary, helped organize Grace Evangelical Lutheran Church under the English Evangelical Synod of the Northwest. The flu epidemic and post-war changes caused the church to disband soon afterwards. First English Lutheran Church was officially organized on May 16, 1920, and on February 27, 1921 the church and parsonage were dedicated, having been purchased from the Swedish Mission. In 1943 the last payment was made on the property, and in 1950 a new parsonage was purchased. Dedication of
the new building was September 19, 1954. With the help of First English, Bethlehem Mission was organized in 1949 and Messiah Mission in 1957. In 1963, First English joined with other Lutheran churches in the area to sponsor St. John’s Lutheran Home. In May of 1955, First English hosted the first Northwest Synod Convention ever to convene in Montana.